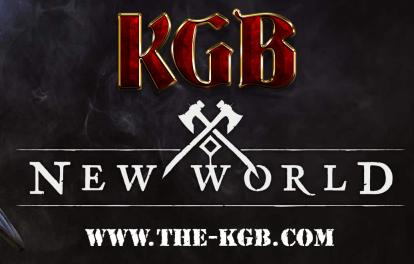 We will meet to discuss our official plans for the KGB New World Faction on WEDNESDAY SEPTEMBER 22ND AT 8:00PM PST / 11:00PM EST

THIS MEETING WILL BE RECORDED

Our MINISCULE presence in Seige windows for one night will not matter. I submit schedule this earlier this one night and be done with it.
Thoughts and considerations for the meeting folks should be thinking about:

FACTION
COMMITMENT
AVAILABILITY - this will be critical if we go the "player crafting and harvesting" account method. The crafting system in NW is not as crazy as CF, but requires multiple people doing lots of things. It is a good one though and lots of fun for those who enjoy those aspects

COMPANY (GUILD) ACTIONS - Unless we are running 30 members or more, it is highly unlikely we will be able to secure a specific territory for ourselves, but the benefit of this is pretty huge. I just dont know we will have the numbers, or the "stayers". And you know what I mean there...

WHAT ELSE? Lots...
That time works for me.
© The KGB Oracle